We’re back on the road with the guys from the Freedom of Movement Tour who are now in Italy but it  hasn’t been a pleasant ride for Chiara as you will read on with an unfortunate trip to the local hospital! Chiara and Alex are travelling across Europe on bicycle to discover the wonderful right of freedom of movement within the European Union. Don’t forget to follow them on their Facebook page , Tumblr and their Twitter handle.

I’m in hospital on a drip. On the plus side, the taxi driver who brought us here stopped briefly on the way to point to us the Corinth isthmus – at least we’ve seen it, or rather, slightly made it out in the Greek night. We had left Athens cycling quite literally through piles of rubbish – we hadn’t seen that much since the Thames. 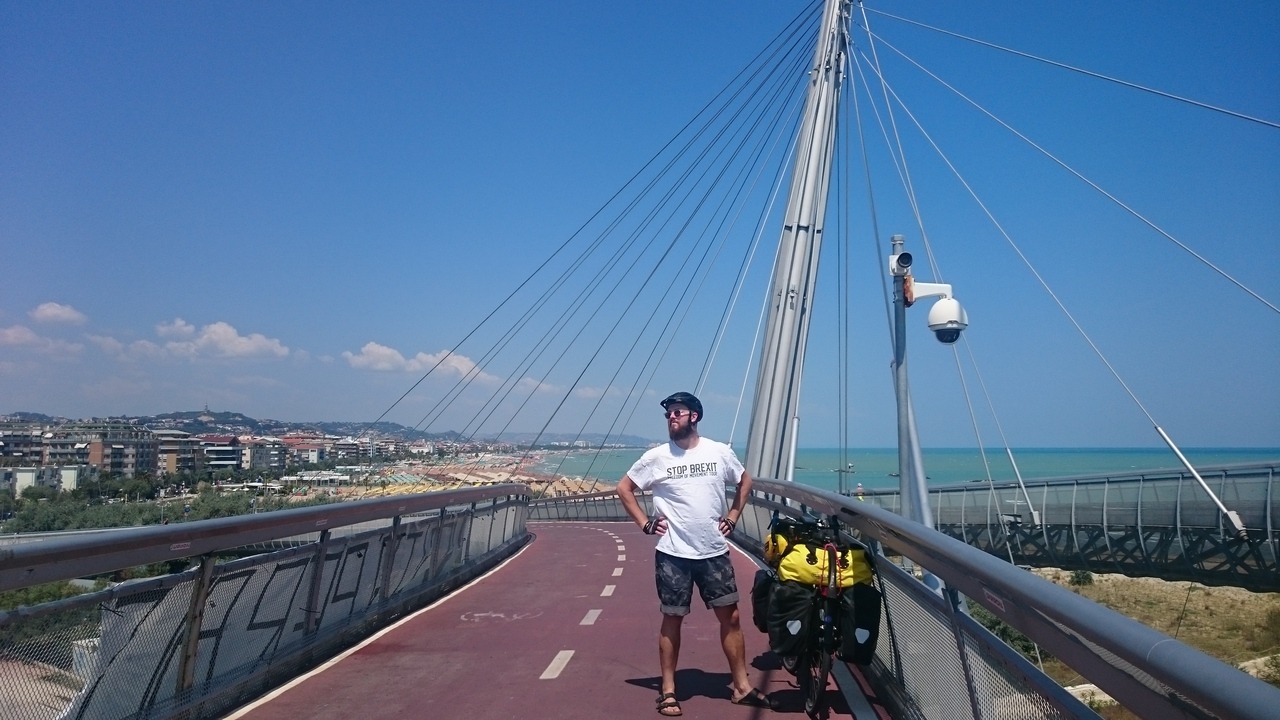 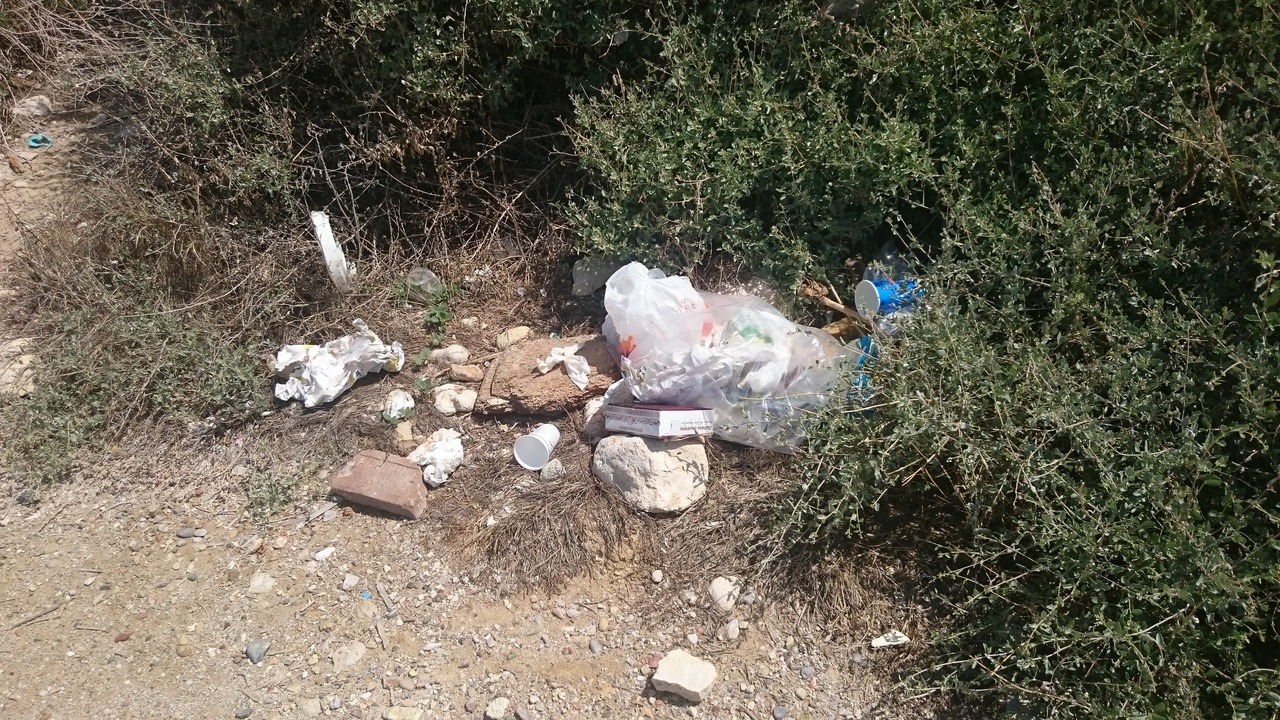 Needless to say that our plans to cycle the whole length to Patras didn’t quite pan out. Having an early start, stopping for a good few central hours of the day to refresh in the crystalline sea, pumping ourselves with hydrating concoctions – all was not enough to combat the roaring Greek sun plus 40-something degrees C in the shade. It didn’t help that the route we took was hillier than expected and we got lost a couple of times. One day, not even an hour after our long lunch break, my brain was suddenly like a microwaved egg and I had to crawl to the side of the road to collect its pieces. Alex is a sweaty bastard so he was fresh as a daisy all the way. He had the strength to go get me some cold drinks, but even then I was still feeling like a freshly barbecued pork chop so we ended up rolling to the nearest hotel rather than our arranged destination. In all this, I was hurt to see that no-one stopped to ask if we needed help. A police car did stop but only to point out the nearest bar. A few hours, litres of water and dips in the sea later I was still a desiccated hot dog and that brings us back to me on a drip. Thanks again, EHIC.

Before getting rid of me, the tired night-shift doctor tells me not to cycle for at least 4 days. Oh, great. Since our plans from A to W are now screwed, we proceed with plan X. This is essentially because we had already booked an extortionate ferry ticket to get to Italy in time for my mum’s and a friend’s birthdays, so after multiple planning sessions, which also see the active participation of the hotel receptionist, we get to Patras where we spend our time slithering sideways along shady walls like pathetic Nosferatu on holiday (me), and feeding stray kittens (Alex). 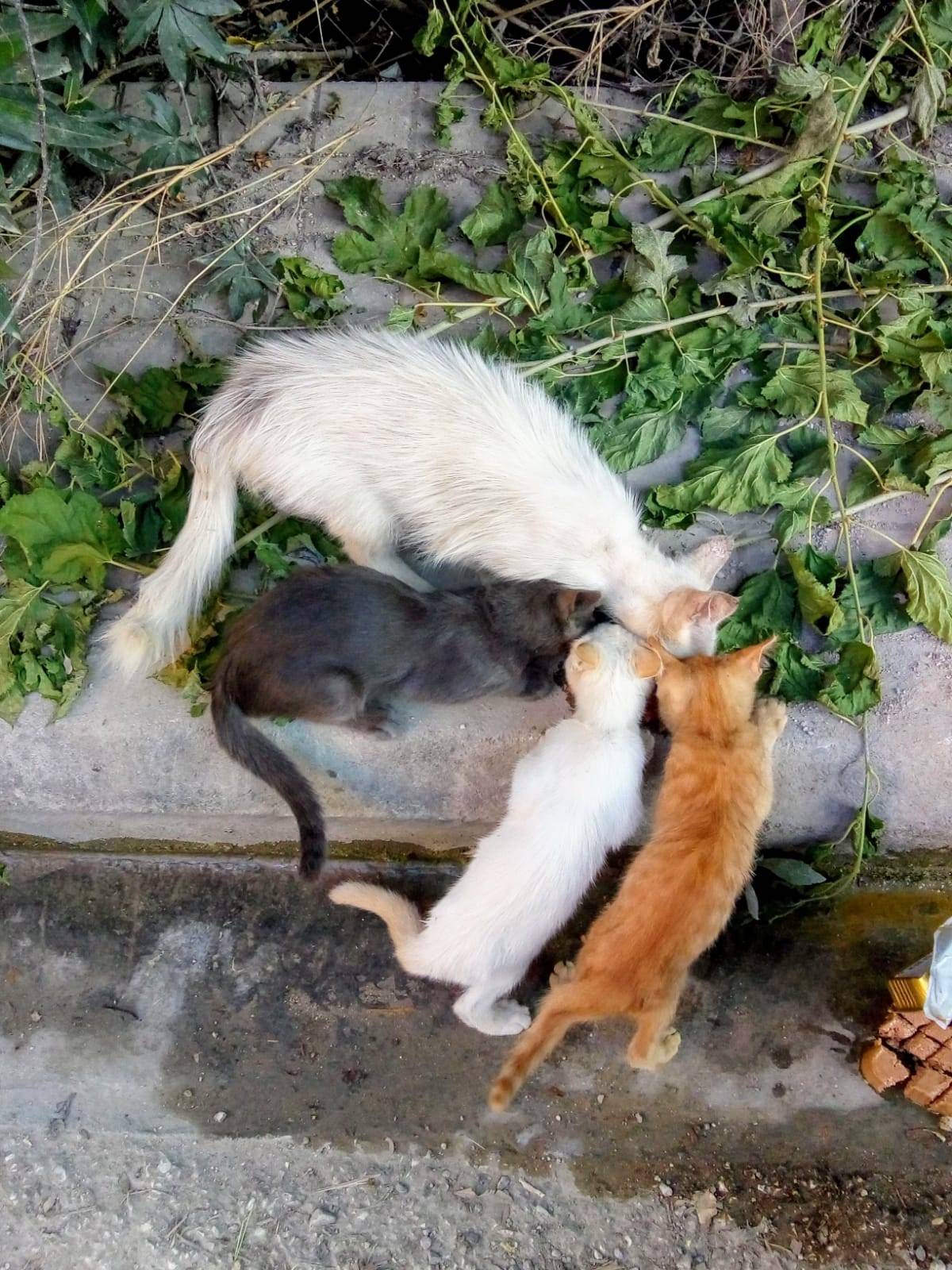 The decision to scarper it pronto actually saved our lives. A couple of days later, we hear that Greece is burning. Kineta, the place where I had the wonderful experience of turning into a steam pudding, doesn’t exist anymore. I don’t have the guts to email the hotel that rescued us, a few kilometres further, in case they don’t reply…

When we finally approach my homeland Italy, the weather seems to have turned. At some point, our cycling northbound through Puglia becomes more similar to swimming, so we jump on a train to Termoli where we dry off in a pizza oven. We eventually manage to cycle to our destination, Pescara, along a beautiful coast full of “trabocchi”, and we are then met by our friend Patrizia. I feel at home again, though not so much because of where I am. After living away from my birthplace for so long, home is no longer where my heart is, for my heart is everywhere and nowhere at the same time. I suppose the people who are still with me despite my voluntary and multiple exiles are what my home looks like today. 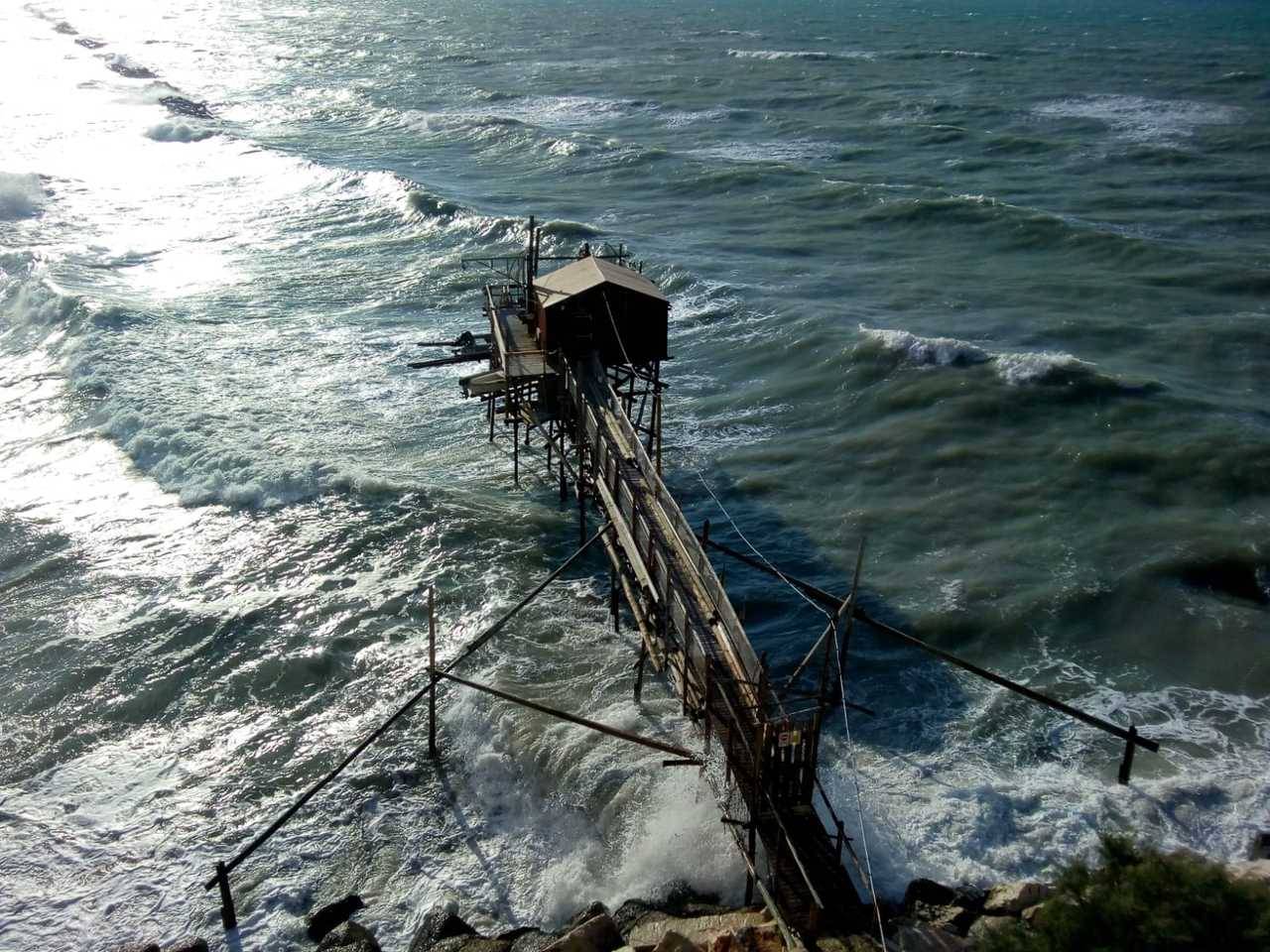 Anyway, several things pissed me right off these weeks, so this post will turn into a great fat rant from now on.

The first of several is obviously my malfunctioning body – I wish I was only a pickled head in a jar like those ones in Futurama. Second and just as predictably, comes my birth country. As soon as we entered Italy two things happened: first off, Some of the Airbnbs we attempted to book tried to avoid taxes by suggesting to reach a deal out with Airbnb. This had not happened to us in the other 20-something countries. Just saying…

Secondly, we got into massive arguments with drivers. Now, all the other countries we have cycled through have their good share of irresponsible and/or inept drivers, in variable percentages. Usually, the twat driver on cock-up duty just drives off in silence after being “notified of their wrongdoing”. Not in Italy. Italian twats in motor vehicles have to defend their actions as if they were little defenceless chubby cherubs and you have just snapped their wings off so they now have all the rights to become rabid cherubs jumping at your jugular vein. One example: a man on a moped burns a red light just while we were going through on a green. We manage to avoid him while screaming our dissent. The man screams back. Apparently, we are overreacting. Now, take this dynamic and apply it to every strata of society and every instance of public and private life: Italy is served.

Thirdly, Italian infrastructure is appalling. That is Italy’s own fault. However, the Genova bridge collapsed and Salvini blames the EU for it. Mr Salvini is no different to the Farages, the Yaxley-Lennons, the Wilders, the Orbáns, the Trumps, the Kurtzs, the Le Pens, you name them. In fact, Salvini is a bit different from Nigel Farage as he looks like your veracious albeit a bit crass next door neighbour rather than a pompous elitist bawbag; and he’s different from Trump because Trump actually doesn’t seem to have much consensus from the electorate – he’s there just because of his money, some Russian pals and a messed-up electoral system. That is why Salvini scares me: however full of hot air, he’s credible. Salvini is there because of the same reasons Brexit is here, and all the Corbyns who fail to appreciate this while inebriated by ideology will be held just as responsible by history.

So, in third position, just for the benefit of rhetoric, not necessarily in order of rage: no sensational coup de théâtre here – Brexit. We are midway through our trip, effectively now cycling back to Scotland, where a frayed umbilical cord keeps me attached to a job and some good memories. Despite months having gone past, Brexit is still an insane reality back there and in our minds, as much as it is a laughable blip in the minds of the majority of the fellow European citizens we have met around our continent, including the UK. There is no understanding of what is behind Brexit and what lays ahead of it. People don’t seem to realise that Brexit is, to quote Irish Times, writer,  Fintan O’Toole , yet another trial run for fascism. I understand, I forgive. It’s a scary realisation which is best to postpone. However, as well as planning our route for the day ahead, we suddenly find ourselves thinking about a possible escape route after the 29th March 2019.

One thing I want to be clear. Our original Demarcation Design tops do indeed say “#StopBrexit”. Some people snigger at this and ask us whether we really think that we can stop Brexit by cycling around Europe. This is the one of the main lines of comments aka insults, we received when we had an article published in the Edinburgh Evening News. Well, just in case any thicko tabloid-reader has stumbled on this post and is reading it past the headline, no, we don’t think we can stop Brexit, not by cycling around Europe nor by juggling sea urchins while doing back flips singing The International. Yes, I am actually a realistic person, verging on the cynical bitch, despite the fact that I’m currently cycling around Europe wearing a #StopBrexit t-shirt. The t-shirt is to make my stance clear, is to shout about an injustice, and is to piss off whoever thought it was OK to screw my life and that of other 4 million odd people in the name of nothing. My cycling is just my personal grieving process for a life I once had and won’t have back in its original form, a country that is no longer what I thought it was, and a peaceful Europe I was born in but that I’m not so sure anymore I will die in. This trip so far has been also a way not to feel to alone, as it has allowed us to meet so many people who have contributed to make me a bit less of a cynical bitch and reminded me I can still somehow trust the human race (terms and conditions apply). 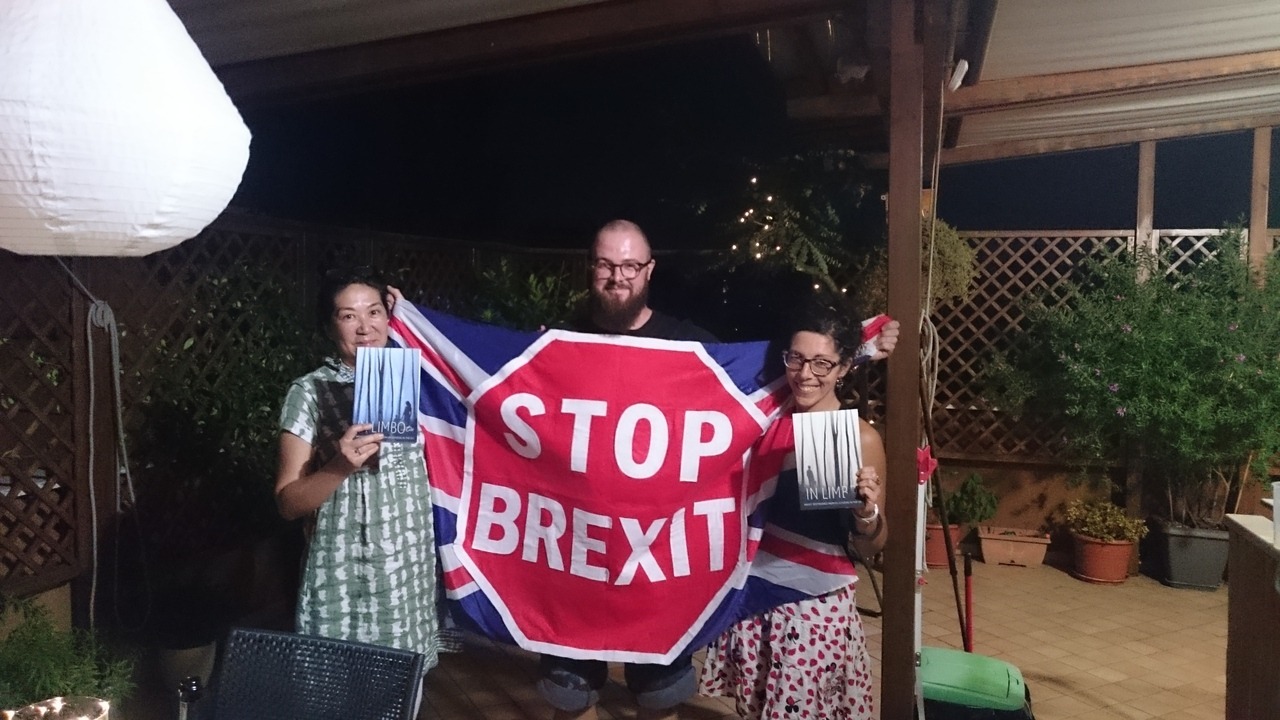 This trip has also allowed me to spontaneously decide to stay almost a month with my family, a thing that hadn’t happened since 1999 (not joking). The fact that my British husband could also be with us is just the beauty of our Freedom of Movement.

Federal fairies at the bottom of our gardens