Peter Cook outlines his strategy and thoughts on the current status of Brexit.

State of the Brexit Union

It is just months away from our scheduled date of leaving the European Union.  In the two years that have elapsed since our referendum it has become apparent that:

1. There remains no plan for Brexit. All the sketchy plans for Brexit (Chequers, No Deal etc.) are inferior to the deal we currently have with the EU.

2. There remain no answers to the question “How will Brexit benefit me or the country?”  Even former UKIP leader Nigel Farage  cannot answer the question, as we discovered recently in his reply to my question, an article for The Independent and most recently in conversation  with a panel from Vote Leave and Open Britain on LBC with Iain Dale.

3. There remains confusion about what Brexit means, although it has become clearer that Brexit offers no value economically, socially, environmentally, ethically and so on. Jacob Rees-Mogg’s best estimate of 50 years Net Present Value for Brexit will see my son aged 74 by the time he is likely to “break-even”. He will be paying for Brexit for all of his adult life. It’s not a legacy I want on my tombstone. How about you?

It becomes clearer with every day that passes that Brexit is simply the pursuit of a political ideology for the few, not the many. All challenges to Brexit, be they legal, technical, social or otherwise have been ignored by our Government and the official opposition, putting their parties before the good of the country and its people.

Some say that Brexit cannot be stopped, including my own brother. They are wrong. They merely demonstrate the condition psychologists call “learned helplessness”.  This occurs when people do not believe they can or should affect the outcome of an event and / or they don’t know what to do about it to alter the course of events. In my brother’s case he tells me that, although he voted to Remain, he believes it would be undemocratic to go against the will of the people. He knows that Brexit will be bad for him and his family but believes he must keep calm and carry on. I am pretty sure that the “silent majority” was a feature of Hitler’s rise to power as well.

In fact, Brexit is very likely to end, through the chaotic combination of a number of countervailing forces. Some of these are summarised in this series of “event strings” below. Different combinations of events lead to a number of end game Brexit scenarios, some of which are a slow painful death of the Brexit beast, others more rapid in nature.

In my work as a business consultant, I’ve used scenario planning as a “gaming” technique to help companies anticipate and respond to alternative futures. The approach was popularised by Shell in the 1970’s. It was a fortuitous meeting with Vince Cable, himself an ex Shell employee and fellow scenario planner, that re-ignited my enthusiasm to think about some of the more likely combinations of events that could lead to the death of the Brexit beast. Vince and I agreed that it was probably impossible to game all the possible permutations, but it was at least possible to consider the end coming, either from what I call “internal combustion”, put crudely, “heat without light”, or from a combination of “external shocks”. More likely, a combination of both. We are in disruptive times and a linear planning perspective no longer applies. Just consider how unlikely it was that Theresa May would get into bed with the DUP? Who knew that she would expect the taxpayer to fund the cost of stockpiling food, drugs and fuel as a strategy to frighten the country into submission and as a “game of chicken” with Michel Barnier?

Here is some future gazing taken from the event strings.  The one thing we know about the future is that it’s unreliable. Please indulge me with your thoughts on the next 2-3 months in terms of disruptive combinations of events that will lead to the death of the Brexit beast.

It is almost certain that the EU will reject our proposals in October, after all they have consistently been a repackaging of the cake and eat it too proposals that characterise the UK Government hubris about empire and other historical and hysterical notions of a lost paradise.  The EU’s rejection will not be an act of belligerence. Quite simply, if the EU were to give Britain a special deal, it would open the floodgates in terms of other countries asking for similar treatment. What exactly would be the point of being an EU member when you could gain similar concessions without paying the club membership fees?

I consider “No Deal Brexit” to be a low probability currently, on the basis that it would guarantee that the Conservatives would be unelectable into perpetuity. It is however an incredibly potent way of silencing resistance … if we fall for it. The effects are unimaginable with deaths related to medicine shortages likely and I won’t detail them here as they are adequately covered at the “Who Cares About Brexit?” project. Suffice to say that, considering the near hysteria that occurred when KFC ran out of chicken, there is a real possibility of civil unrest within days of a No Deal Brexit. I do not believe that the rank and file Conservative MPs are self-harmers and we must not confuse what is a bargaining tool with the nation and the EU with a serious intent to “Make Conservatives History”.

Never underestimate the importance of entropy in extinguishing a political strategy. This is the stuff on which “Yes Minister” was based. The stoic efforts of our civil service work quietly but consistently to place obstacles in the way of Brexit from the many private conversations I have had with individuals in high and low places …

I talk a lot with people on social media on both sides of the Brexit dilemma. There is dismay on both sides about the lack of progress being made. Meanwhile the rhetoric continues to say that the “Brexit Titanic” has left the harbour and it will be plain sailing ahead. I am always much more interested in what is happening in politics behind the stage than on stage. Private conversations with people who face the politicians on a daily basis via SODEM indicate that it’s not plain sailing at all. This means that further defections, resignations, revolts and so on will continue through the party conference season, further weakening the “Brexit Obsessive Compulsive Disorder” to breaking point. We already see Boris Johnson starting disruptive operations in the Conservative Party and similar movements are taking place to the left. Movements in the centre may suddenly make it a more attractive place to be …

This is the end my friends

In conclusion, I estimate that Brexit currently has a likelihood of around 50%

It is never a good idea to pursue a strategy in the face of compelling evidence that it will not deliver a better future. Most serious politicians know this. The present difficulty for Theresa May and her Government is how to stop Brexit AND remain electable. A change to the “parliamentary paralysis” that has locked Britain in a state of political entropy can come from a combination of actions. Here’s my “Five A Day”. What are yours?

1. Continue to explain the benefits of EU membership and debunking of items labelled project fear as Brexit reality.

2. Challenge misconceptions that continue to occupy the minds of leave voters, sometimes sensitively, sometimes provocatively, depending on the person / group involved.

3. Ask your MP to have courage. Point out gently or otherwise that they are unelectable if they do not stand up for the best interests of the country.

4. Talk about the state of play and the fact that Brexit can be stopped, to friends, family, colleagues, burnt out Remainers, Leavers in regret, Leavers in denial etc. to target the issue of learned helplessness.

5. Marching, getting active locally in whatever way you can. Never let a day pass without doing something to “Break Brexit Before Brexit Breaks Britain”. 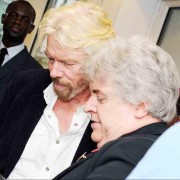 Peter Cook
As well as an ardent campaigner for Britain remaining in the European Union, Peter Cook leads Human Dynamics, offering Business and Organisation Development. He also delivers keynotes around the world that blend business intelligence with parallel lessons from music via The Academy of Rock. Leading innovative Pharmaceutical Product Research and Development teams to bring multi-million dollar life-saving drugs safely to the market including Human Insulin and the first treatment for HIV / AIDS and Herpes. Peter is an MBA, Chartered Chemist, Chartered Marketer, FCIPD and an NLP Old Master.